Skip to content
Real Estate Trends Among Millennials In 2019

With each generation, the landscape of various industries changes and gets reshaped – this is also true for the real estate industry. 2018 was a big year for millennials in terms of homeownership, with the rate rising by half a percentage point over 2017 – to 64.4% – as reported by the U.S. Census Bureau.  And this was largely credited to the increasing number of first-time home buyers. 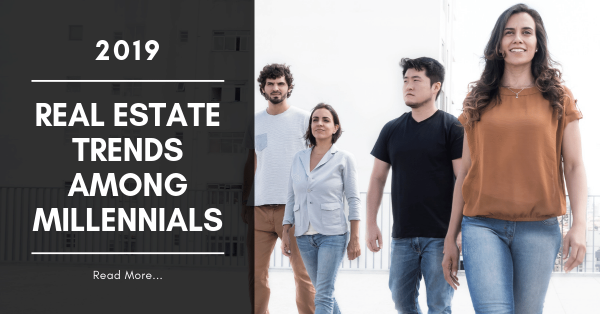 Competition Is Expected To Increase On Multiple Fronts

With the economy becoming stronger, more and more millennials have job security nowadays, and as a result, they start looking to buy a home, becoming actively involved in the market. Their job stability gives them more purchasing power, and according to a 2018 report, 30% of millennials buy a home for the price of at least $300,000 – which is up 14% when compared to 2013.

Given that the amount of options available (in the United States) is relatively limited, the competition for the available houses will increase. Individuals looking to sell a home are expected to receive multiple offers and with higher bids. It’s also noteworthy that millennials will not only go head to head against each other in the competition for available houses, but they will also be part of a war against baby boomers. This is due to the fact that both groups generally seek amenities that are similar.

The Internet Continues To Play A Major Role

The internet can be used for many tasks nowadays, including buying a home. Clients that are now in the marketplace are more well-researched when they find a home that they are interested in. This is not a bad aspect of things, but it does mean that Realtors will have to change the way they approach things.

First of all, given that plenty of information is available on the internet, clients are already well informed. Agents will have to find different ways to present homes in order to appeal to millennials, by presenting them with more “insider information” that one can’t find on the internet. This is where a knowledgeable agent could truly shine, by using their skills to the property they are trying to sell in a new light.

Second, millennials rely a lot on social media, which is a big influence on their purchasing habits – something that applies to home buying as well. Real estate agents that have positive online reviews, as well as a social media presence, could stand to gain a lot by having a good reputation online.

Less Of An Interest In Fixer-Uppers

According to a study, 68% of millennials see residential and commercial real estate as a stepping stone, with the end goal being their dream home. Despite this statistic that shows that most millennials are most likely to not stay in their first house forever, they generally look for “perfection”, and would prefer homes that are newly constructed over “fixer-uppers”.

This preference is the result of avoiding renovations and having to deal with certain problems regarding electricity or plumbing. According to a study on the subject, millennials don’t generally have the time or the money necessary in order to take care of a fixer-upper. Homeowners who are 26 years old or younger have a median household income of $82K, while the median student loan debt is $25K. What this means is that a down payment could be very difficult for some.

When it comes to the “perfect” home they look for in a first house, millennial homebuyers look for certain key elements, such as open floor plans and big kitchens. An ideal location is also important, as millennials tend to look for homes that are close to their workplace, and they buy more in suburban areas – although they prefer urban locations. Technology also plays a role, such as having good cell reception and many options in terms of internet providers. This should come as no surprise given that 43% of people who are using smart home products are millennials.